I was talking to a guy by the name of Kevin recently. He was good enough to let me take some photo's of his current house truck. 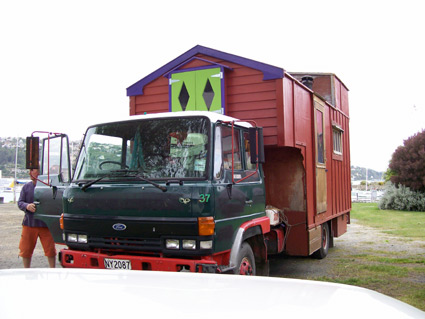 Kevin has been living in various buses and trucks for quite a few years now and has come up with some specific criteria, that he feels are necessary, for comfortable living in a nomadic home on wheels. Essentially, in Kevin's opinion, less is more. He doesn't like a mobile home to be extensively fitted out with built in furniture, saying that you end up with only a small place to sit and you are forced to sit bolt upright, in the small built in and uncomfortable seats. The impression that I got, was that the most important item for him in a mobile home, is the standard household couch. 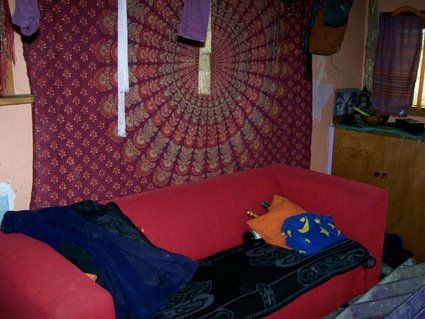 When Kevin bought his current house truck, it was built on an old Bedford chassis. Because the truck was old, it was expensive to run and would have required considerable maintenance to keep running. So he bought an N series Ford, which had been retired from life as a round town freight truck. This truck has a longer chassis than the old Bedford, so the part of the accommodation that used to sit over the cab now stops just behind the cab. This has allowed enough room under, for Kevin to build a large tool storage cabinet and he intends on building a small bathroom in the space left over, on the other side. 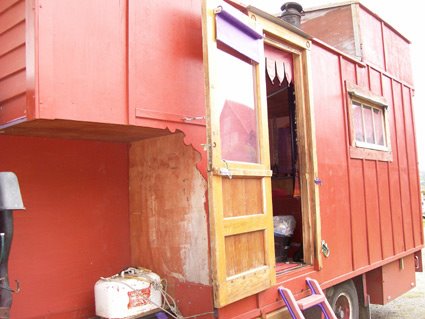 For comfort, Kevin has installed a used log burner, out of a house. For such a small space, it requires very little wood to heat his truck. In fact he has been able to run it entirely on scraps from various carpentry jobs he has been working on. Next to the fire place is a fairly large flat screen television, which like the fire place, is placed for an excellent view while seated on the opposite side of the truck, on the couch. 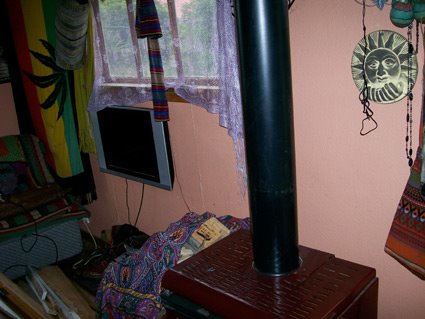 His bed is a decent sized one, located in a loft, above what on the previous truck was the cab. There is also a loft at the rear of the truck, which is is used for storage. 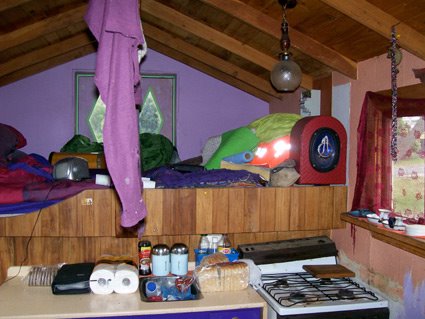 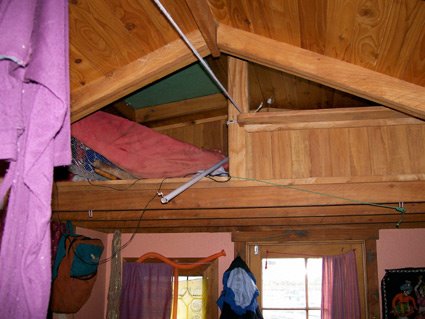 The kitchen is still a work in progress, but has all of the essentials. Decent size stove/oven, bench, sink and storage. This currently works for Kevin, though he does have plans to improve it. 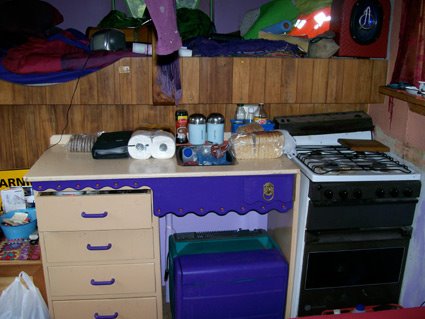 Looking out the back door, has the feeling of being in a small cottage. The big difference, though, is that the scenery can be different every day. From over looking the harbour, as on the day these photo's were taken, to maybe a view of the forest or lake the next, or maybe in the middle of an exclusive suburb. Or you could step out and be at work, if you happen to park there, not wishing to wast time getting to work in the morning. 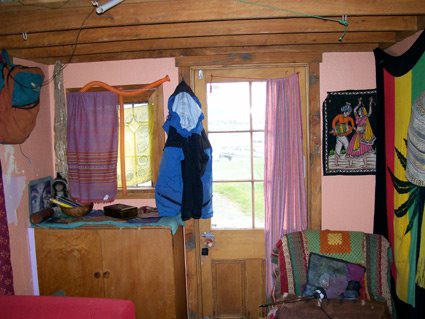 Unfortunately Kevin had no notice that I was going to visit and take photo's of his home, as he was just about to travel out of town to do some building work for a client. He normally has much less clutter inside, which would have allowed clearer photo's.

My over all impression of this house truck is that it is well setup for a single person, as Kevin is, to live in comfort. If I was to set up a truck of the same size for myself, I would use much the same type of amenities, though I would probably arrange them differently. Of course it is much easier to do if you are starting from scratch, unlike in Kevin's situation of having an existing housetruck, which he moved into as soon as he took possession. The N series ford is in my opinion a good sized truck for either one person or a couple to build a home on. It is big enough in both size and weight for reasonable sized self contained accommodation, yet is small enough to keep running and maintenance costs within limits.